In order to demonstrate attacks against the content of the external memories of a SoC and also to test the efficiency of the SecBus architecture, we developed a programmable hardware attacker. The attacker, just like the AXI simple bridge, sits in the PL, between the CPU and the DDR. But while the simple bridge simply counts the AXI transactions, the AXI bridge can spy at them and even modify them on the fly. Please consult its documentation in the (download area) for details.

The AXI bridge can be used with the Xilinx [Zynq] cores and the ZedBoard prototyping board. Zynq cores embed a ARM processor and all its usual peripherals (USB, Ethernet, flash...) including external memory controllers. This part forms what is named Processing System (PS) in Xilinx terminology. Zynq cores also embed an FPGA matrix, the Programmable Logic (PL).

This page explains how to configure the PL and the software stack to boot a Linux kernel with all accesses to the external DDR flowing through the AXI bridge in the PL.

In Zynq cores, the Processing System (PS) usually accesses its external DDR memory in the [0x0000_0000, 0x4000_0000[ address range (Regular Address Space or RAS in the following). In order to process the memory accesses it would be convenient to route them to the Programmable Logic (PL), instead. If this was possible, one could simply configure the PL to implement the desired processing and instruct the PS to access its DDR through the PL. Of course, in order for this to work, the PL would have to route the PS requests to the DDR and the DDR responses back to the PS. The kind of processing implemented in the PL can be anything from no processing, monitoring, tracing, cryptography...

Indeed, thanks to the Zynq architecture and its quite dense PS-PL interface, it is possible. The SecBus HSM uses this organization to implement cryptographic processing of the memory accesses (encryption, integrity checking). The AXI bridge presented here implements the same AXI transaction counters as its simple counterpart, plus programmable eavesdropping and tampering with the AXI transactions. It thus can be used to mount attacks against the content of the external memories, either to extract confidential information or to alter the nominal behaviour of the system. This is the reason why it has been developed: demonstrating attacks and also demonstrating how the SecBus architecture can prevent them.

The PS and the PL communicate through a set of AXI interfaces. The AXI bridge uses 3 of them:

You are done and you are running a minimal GNU/Linux OS with all accesses to the external memory routed to the PL: 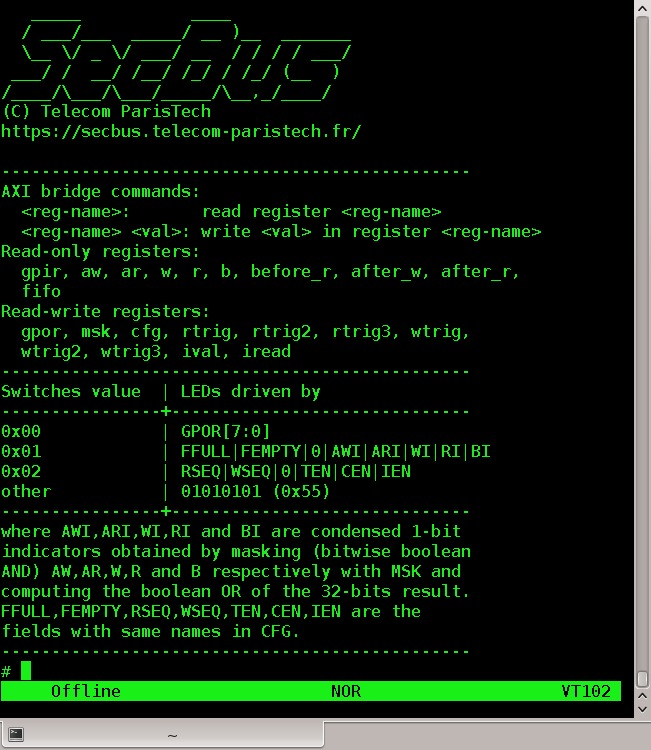 The root password is secbus. You can observe the bridge activity thanks to its internal registers. You can also mount attacks, retrieve passwords or cryptographic secret keys, achieve privilege escalations... Please read the documentation for detailed information about the AXI bridge features. Several aliases are defined to ease the interactions with the bridge, as summarized in the welcome banner that shows up in the serial console.

Note: the SD card partition from which the system booted is mounted on /mnt, so, if you added some custom files on the SD card, they are in /mnt.