SecBus is available in the form of a simulator of a ARM or Mips based system equipped with our technology. It runs an example application on top of a tiny Operating System (OS). The example application is a kind of interactive shell that allows to play with the security policies applied to memory pages, launch attacks and see how SecBus prevents them. In the following we will guide you step by step to download, install and compile the virtual prototype of a complete SecBus equipped platform. Then, we will download, install and compile the SecBus software components:

Finally, we will run the example application (on top of the HSM drivers, the SSM and the OS) on the virtual prototypes and play with the SecBus main security features.

The provided virtual prototype is a fast, bit accurate, cycle approximate simulator of a complete SecBus equipped platform. It runs on a regular GNU/Linux box. Of course it is not as fast as the real hardware but it is sufficiently fast to boot our tiny operating system and run the example application. It is also much easier to install and run. If you intend to test what SecBus is, installing and running the virtual prototype is the next step after reading the introduction. The virtual prototype embeds a simulation model of a General Purpose Processor (GPP), of the Hardware Security Module (HSM), of a set of peripherals and of external memories. Two different CPU architectures are currently supported: ARM and Mips. The virtual prototype has been tested on 64 bits Fedora, Debian, ArchLinux and Ubuntu operating systems. It should work unmodified or with minor changes on most UNIX-like systems. There are no plans to support or test it on Apple or Microsoft OSes. Please feel free to port it but do not expect any help on this.

The virtual prototype is written in SystemC, a hardware description language based on C++. The coding style is 100% compatible with the SystemCASS implementation of SystemC. If you want to benefit from the 5 to 10x acceleration of SystemCASS, you can.

If you do not have SystemC installed already, please download the SystemC distribution from the Accellera web site (http://www.accellera.org/home/), install it and define the SYSTEMC environment variable:

If you prefer the SystemCASS way, please download it from its Subversion repository and install it:

In order to compile the software components that you will run on the virtual prototype you need cross-compilers, linkers, debuggers, software lbraries... All the needed pre-compiled binaries are available from the MutekH web site (in https://www.mutekh.org/www/tools/precompiled/). The same binaries for the ARM and Mips architectures are also available in the downloads section. They are designed to be installed in /opt/mutekh. Of course, if you know how to do so, and if you prefer the hard way, you can visit the GNU web sites, download the sources and compile them. Install the tool chain and make sure to add the binaries to your PATH:

Once the different pre-requisites are installed, it is time to install the SecBus virtual prototype and software stack. First download the provided archive (see the downloads section). In the following we assume that the archive is unpacked and that the SECBUS environment variable points to it:

Compiling the virtual prototype, the software stack and running the simulation

We will first compile the virtual prototype, then the various software components (HSM drivers, first stage boot loader, SSM, MutekH OS and example application) and finally launch the simulation. In the following instructions please replace <arm|mips> by the architecture of your choice (arm or mips). Important note: a virtual prototype compiled and linked with the official SystemC library cannot be run with SystemCASS and conversely. If you want to switch from one to the other, first clean the virtual prototype (make -C $SECBUS vp-<arm|mips>-clean) and recompile it. 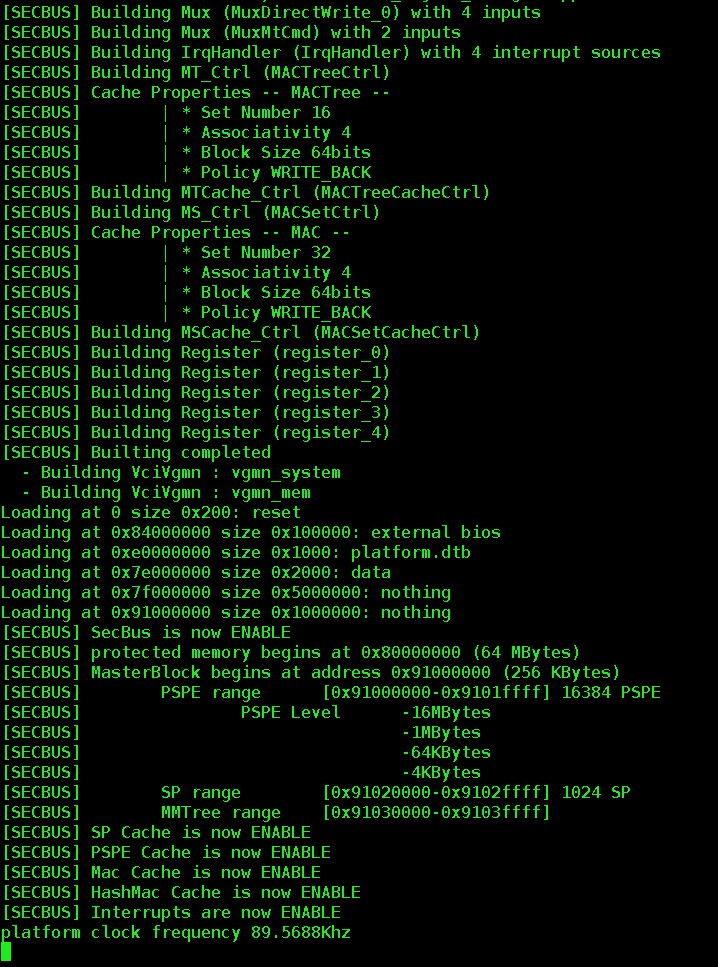 The various software components print their own debug messages in the pseudo-tty. They show that the boot loader started its execution, initialized the HSM, loaded, checked and installed the MutekH kernel and jumped into it. The MutekH kernel, in turn, booted, discovered the hardware peripherals (including the SecBus HSM), attached them their respective software drivers, and jumped into the example application: 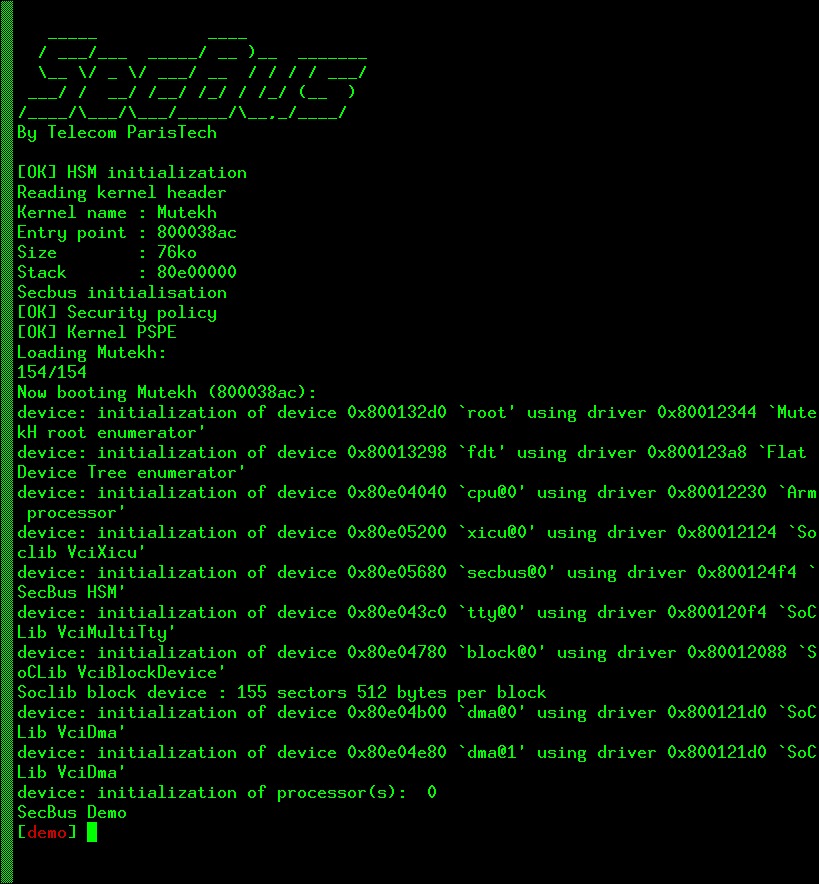 The [demo] prompt in the pseudo-tty indicates that the tiny example interactive shell is ready. Type list to get the list of available commands:

Type help <command> to get some help about them:

Playing with the example software application and testing the security

The provided example application is an interactive shell-like application, built on top of the MutekH OS. It offers a small set of basic commands to define security policies and assign them to memory pages, to read - write the external memory and to drive an external DMA engine (our attacker) in order to see SecBus in action.

The memory layout of the simulated system is as follows:

In this little example we protect a 4kB region in integrity with MAC trees and in confidentiality with CBC. We populate it with some stuffing byte from the CPU (legal), read back from CPU, modify from CPU (legal). Then we use the attacker DMA to modify the content. On the next read by the CPU, the HSM immediately detects the integrity violation and raises an interrupt (that stops the simulation in the current version).

The console closes and, in the terminal in which we launched the simulation, the HSM prints some debug information about the integrity violation that has been detected: